President Trump is overseas for the 2017 EMS week. But that fact is not what has EMS workers as upset as what Trump said in a recent speech. Trump called paramedics ambulance drivers.

In a speech live streamed to various EMS week events the President praised the work done by all who render pre-hospital care. He drew criticism with many EMS works when at one point in his speech he said. 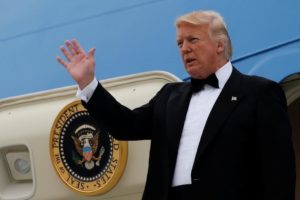 “I mean, I am a healthy man so we have never needed you to respond to my amazing penthouse in Trump Tower. Believe me, I know how incredible the men and woman ambulance drivers are, these are great people. We don’t pay them a lot of money like doctors and nurses but they do the same incredible work.”

Many EMS shocked by this statement. It harkened back to a similar flub made by President Obama during a State of the Union Address.

Later in his video stream, the President talked about how his reforms to the health care laws would allow him to raise the minimum wage for EMS workers. The president did not give an exact number.

The discussion of EMS pay was a second insult to the many volunteer EMTs who serve US communities.

EMT Jack Johnson said this. “I thought he was all about supporting us folks in uniforms. Then he goes and calls us by a derogatory term. I do more than just drive the booboo bus. Pulse I do it for free. 100% volunteer here. Am I less of a medic because I don’t get paid?”

City EMS director Chris Janson had this thought. “After 30 years of being called an ambulance driver, I have gotten used to it. What bugs me more president after president gives a speech in person during police week. But during EMS week, nada… we get shit.”

When asked for a comment Press Secretary Sean Spicer claims the term Ambulance Driver is an “alternative title”.

2017-05-26
Staff
Previous: Keyboard commanders to be awarded meritorious service awards
Next: Divorce rate among cops up 300% after KP from FitCops announces she is single